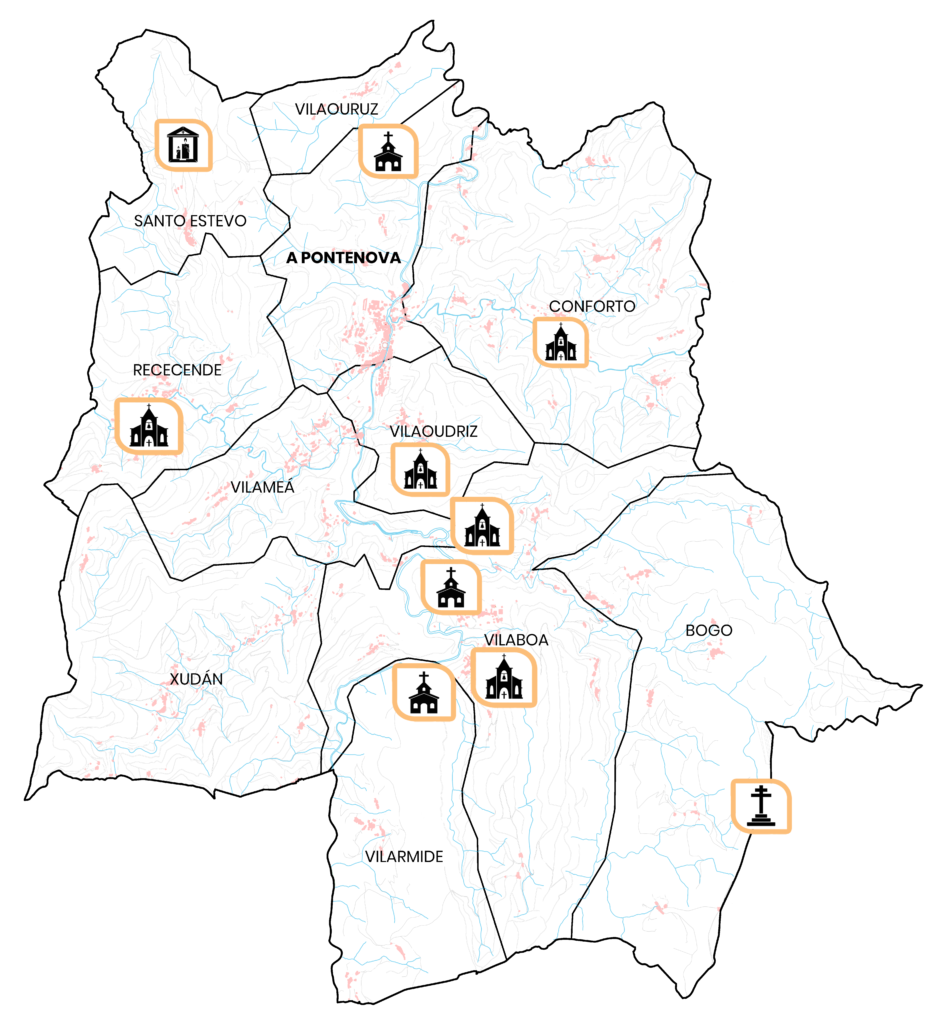 It is really unusual to see such a large number of religious architecture examples that exist in the district of A Pontenova. The natural geography and isolation of the many of the towns and villages in the past, led to the proliferation of a large number of small chapels and hermitages in addition to the Parish churches.

It is important to note that the vast majority of these churches and chapels are closed only opening for special religious occasions. For viewing the interiors of these building, it would be necessary to contact the key holder, usually in a house nearby. 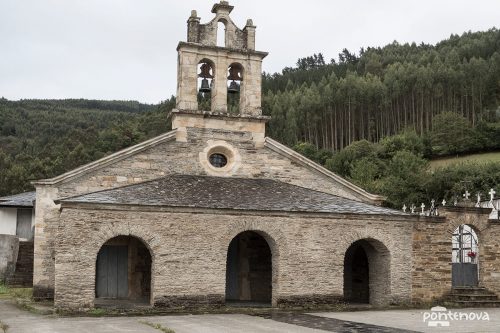 Among the many examples of religious architecture that exist, we highlight the following:

Until the end of the XVIII century, the place where the parish church now stands was called Xestoso. Originally there was the primitive church, a Romanesque building here.

In May 1662 the construction of the current Sanctuary began in accordance with plans by the architect Alderman of Viveiro Diego Ibáñez Pacheco, the construction being completed in 1664. The exterior building had very simple lines and very sober ornamentation. Later the tower which was constructed in 1744, comprises of 4 sections: the lower part is made up of 3 medium vaulted arches; the second section has a barred window; on the third section the 4 bells are situated in 4 banked arches; and the fourth and last section is octagonal in shape of a pyramid covered with slabs and copper edges, on a pedestal of 4 large ornate stone pinnacles. During the century XIX the tower underwent several modifications and in 1964 it was completely restored.

The main entrance of the church is under the tower. It is of Renaissance style, with half point arches and is framed by ribbed pilasters and an ornate frieze.

The south doorway, known as Puerta del Sol is flat with layered ornamentation, unadorned frieze, curved pediment and sundial with a face of Muhammad.

The north door, known as Puerta de la Luna, is similar to the south door, but it lacks a sundial. In its place, there is a stone carved image of the Virgin Mary.

Located in the Vilarmide Parish, it has a rectangular transept with a portico at the entrance, a main chapel with a large triumphal arch and sacristy at the head.

Inside there is a neoclassical altarpiece from the XIX century with images from the XVII and XVIII centuries .
Parishioners make their offerings, usually made of wax representing the diseased body parts, or figurines representing diseased body parts, washed with a handkerchief moistened in the fountain near the sanctuary, they then leave the handkerchiefs hanging in the vegetation that surrounds the fountain.

The pilgrimage of San Pedro Fiz is held on the first Sunday of August.

SANCTUARY OF THE VIRGIN OF CARMEN DE COVA

Located in the Parish of Vilaouruz and dates from the second half of the XVII century. It has a Spiral column main altarpiece with 3 niches on each floor and a Gothic incense burner from the XVI century. On the last Sunday of August celebrations are in honour of the Virgen del Carmen de Cova.

It was rebuilt in 1769, retaining the front and the three semicircular arches that separated the two existing naves. The two the altarpieces found inside are from the XVII century with baroque carvings one of them standing out for having a relief of the Cruz de Caravaca in the centre. In the sacristy there is a silver parish cross with a wooden base from the XVIII century and two fonts, one for holy water and one baptismal. We can also find shackles and chains of the inquisition in this church.

Although it was renovated in the XVIII century, some of its elements are inherited from the Romanesque period. It has a rectangular nave, with a narrower main chapel, a vestry in the front and a portico in the opposite nave.

On each side of the central nave, there are two lateral altarpieces and on the left side, there is an altarpiece as well as the carved central niche both belonging to the last third of the XVI century, displaying the plateresque style.

Its construction dates back to the second third of the XVIII century, as do the altarpieces, with some carving from the XVI century. It has three naves separated by semicircular arches on pilasters. Each nave has an independent door that opens to the portico.Two lateral altarpieces stand out with Solomonic columns and pilasters, as well as another altarpiece in baroque style.

CHAPEL OF OUR LADY OF THE ASSUMPTION (TO ERMIDA – VILABOA)

It is an old parish church of Romanesque origin. It has a Renaissance main altarpiece with two floors and three aisles from the XVI century and two others minor altarpieces, one of them Solomonic from the XVII century

CROSS OF A GRAÑA

This stone cross has a mechanism that makes it rotate. Despite the fact that the most common in this type of monument is that the image of the Virgin Mary that appears on the front of the cross, in this particular case the image that appears is of Santa Barbara.

Experts believe that this cross, in addition to being an element of road protection for travellers, also fulfilled a communication function. Considering that it revolves, it was interpreted that when the figure of Jesus Christ who is depicted on the other side faced the roadway, it would indicate good weather and travel security; on the other hand, if it were the figure of Santa Barbara who faced the road, it was a sign that announced bad weather and other dangers.

The wayside shrines, as their name indicates are “donation boxes” there purpose being to collect small offerings and alms from the walkers to assist the passage of the souls in Purgatory by redeeming their sorrows. In compensation, once these souls are released, they will mediate for those who made the offerings.

Alms were not necessarily strictly monetary in nature, there could also be different products given as offerings: flowers, potatoes, corn, bread, oil, honey, wax, etc.

The wayside shrine de O Acebro consists of a monumental-looking construction located at a crossroads next to the Camino Real that led to the Lands of Miranda. 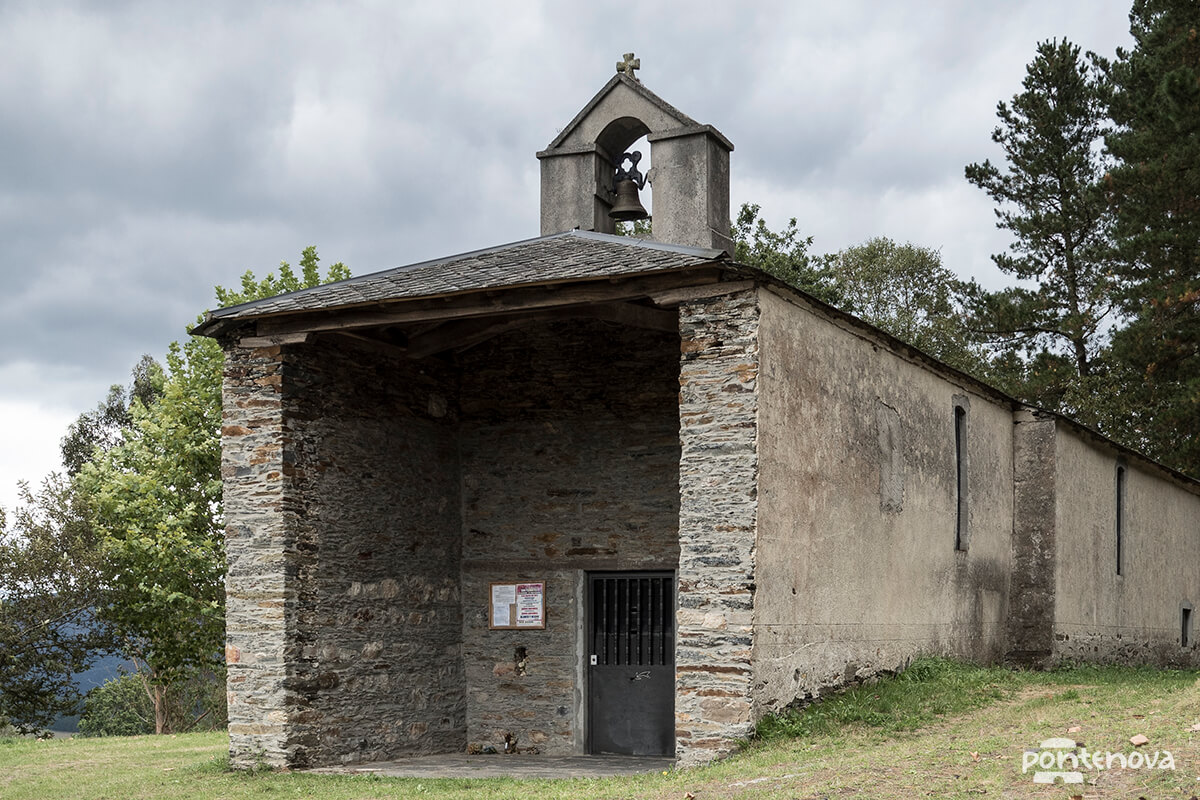 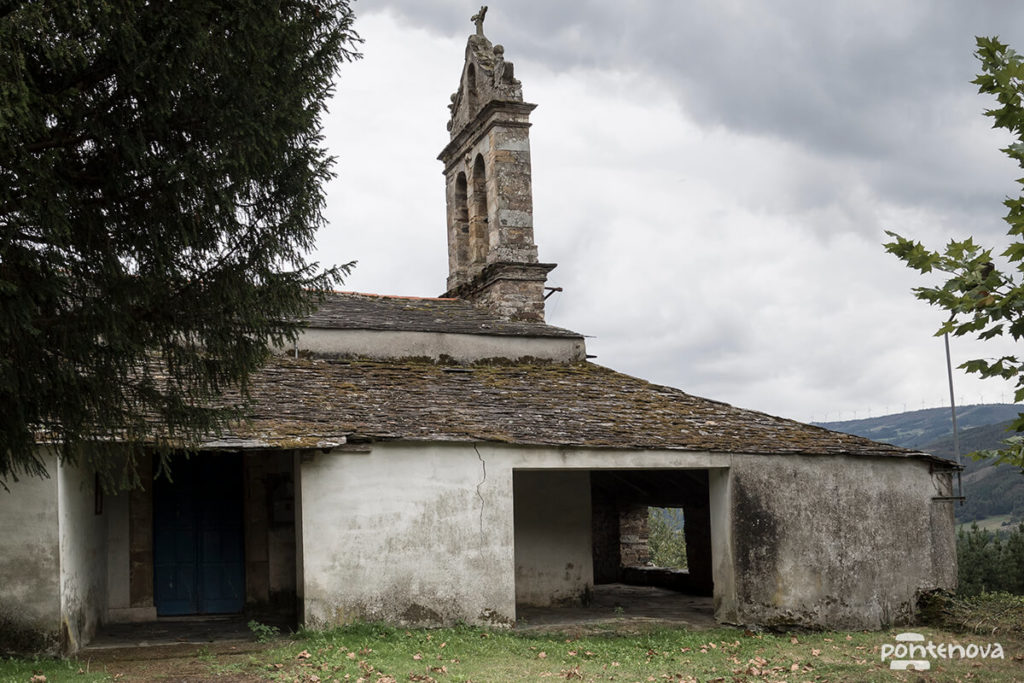